Part 45 of Shipping Wonders of the World was published on Tuesday 15th December 1936.

This issue included a colour plate illustrating the Joseph Conrad. It previously appeared as the cover to part 14.

K M Sibley. It shows the homeward-bound Lochmonar at Gravesend, Kent. The Lochmonar was built in 1924 at Belfast by Harland and Wolff. Her gross tonnage is 9,412, her length is 485 ft 7 in, her breadth 62 ft 2 in and her depth 35 ft 6 in. She belongs to the Royal Mail Lines. 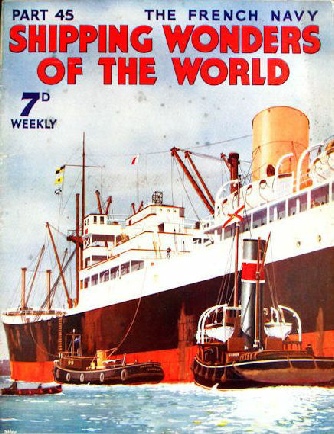 The Voyage of the Svaap

The account of William Robinson’s circumnavigation in a ketch only 32 feet 6 inches long, continued from part 44.

This chapter is the ninth article in the series Great Voyages in Little Ships.

Round the shores of Great Britain there re no fewer than 200 distinct types of coastal craft which are rapidly disappearing before the advent of the modern motor vessel. Whereas a few years ago British coastal waters were alive with the sails of the little fishing boats and coasters, to-day, save for the white canvas of the yachtsman in summer time, it is becoming a rare thing to see a sail. Now that the old types, which have behind them a thousand years and more of seafaring history, are disappearing so rapidly, they are inspiring an interest far greater than they ever did in the days of their prosperity.

Old methods of whaling have been largely superseded by the introduction of mother ships or floating factories for dealing with the carcasses of whales after they have been caught by the small whale catchers. The floating factories can work independently of any land base. Modern whaling is a business run on commercial lines, and scientific research is now directed to obtaining information about the habits of whales. The pelagic whaler nowadays depends on the mother ship, which acts not only as a self-contained base for the small whale-catchers, but also as a floating factory. In former days the carcasses of the whales were flensed - cut up - alongside in conditions often of great hazard. To-day, the carcasses are hauled up through trunk-ways in the stern - or sometimes in the bows - and dealt with on board. Although there is much less demand than formerly for whalebone, other by-products find a ready market. Whale oil, used for making soap, explosives and margarine, is also a valuable lubricant. Whale meat is used extensively for human consumption. Spermaceti is the base of many pharmaceutical preparations. The most valuable by-product is ambergris, used in the perfumery industry. In modern pelagic whaling nothing is wasted. With the earlier chapter, entitled There She Blows!, this forms a complete survey of whaling in bygone days and at the present time. This further chapter gives a comprehensive account of modern whaling, and readers of The Cruise of the Cachalot and Moby Dick will find it interesting to compare past and present.

Before the war of 1914-18 the French Navy was weakened by a divergence of opinion on policy, but since 1919 great changes have taken place and a well-balanced, powerful fleet has been evolved. The Washington Conference, intended to limit naval power, had exactly the opposite effect so far as one country was concerned. France’s weakness at seas was exposed and she immediately set about rebuilding her fleet up to the limits imposed by the Washington Treaty. She was fortunate in having a Minister of Marine of exceptional ability at that time, M. Georges Leygues, and the programme of reconstruction was planned and carried out with characteristic thoroughness. To-day France has a remarkably complete and well-organized Navy, and her submarine fleet is great than that of any other Power. The submarine cruiser Surcouf (which cannot, however, be considered typical) is 361 feet long and has a surface displacement tonnage of 2,880.

This chapter is the second article in the series on Fleets of the Foreign Powers.

A description of the Marwarri, completed in 1935 at Port Glasgow for the Indian-American trade of T. and J. Brocklebank, Ltd. In service she has a speed of about 13½ knots, given by a single set of turbines driving the screw through single reduction gearing. The turbines themselves turn at about 2,500 revolutions a minute and develop 5,200 shaft horse-

Power. This the thirty-fifth article in the series on Merchant Ship Types.

It is the duty of the Fishery Protection Service to see that British and foreign fishing vessels abide by the regulations and restrictions governing the fishing grounds. After an offence against territorial laws, however, fishermen will often run considerable risks to avoid arrest. The Fishery Protection Service is organized by the Navy in co-operation with the Board of Agriculture and Fisheries, in England and Wales, but Scotland and Ireland have their own organizations.

Apart from the great centres such as London, Glasgow and Southampton, which handle mainly ocean-going traffic, there are many interesting ports dealing with the cross-Channel packets which ply regularly to and from Great Britain. Shipping Wonders of the World has already dealt with several of the larger ports in the British Isles. More familiar, probably, to many readers are the smaller ports from which vessels sail on the various routes to the Continent: Dover, Folkestone, Harwich and Newhaven. Liverpool, too, in addition to its other traffic, has a packet service to Belfast, another to Dublin, and yet another to the Isle of Man.

The Battle of Tsushima

The Russian Baltic Fleet, under Vice-Admiral Rozhdestvenski, on its way from Europe to Vladivostok, was totally defeated on May 27 1905, by the Japanese Fleet, under Admiral Togo, in the Strait of Tsushima, at the entrance to the Sea of Japan. The Battle of Tsushima was the first decisive battle of the steamship age. It was a shattering defeat of Russia by Japan, and its effects were far-reaching. It demonstrated Japan’s efficiency as a naval power,and indirectly hastened the end of the old regime in Russia. It also showed how necessary it was for naval officers to be trained in the tactics of warfare at sea.

This chapter is the sixth article in the series on Decisive Naval Actions. The article is concluded in part 46.

A TRAINING SHIP FOR FIFTY-TWO YEARS, the Joseph Conrad is now registered as a yacht. She was formerly the full-rigged ship, Georg Stage, built at Copenhagen in 1882 and rebuilt in 1906. She served as a Danish training ship and was bought by Mr Alan Villiers, an enthusiastic advocate of the value of sail training. In 1936 she was sailing round the world with a number of apprentices. The Joseph Conrad 203 tons gross, has a length of 100 ft 10 in, a beam of 25 ft 3 in and a depth of 13 ft 3 in.

This colour plate previously appeared on the cover of part 14. 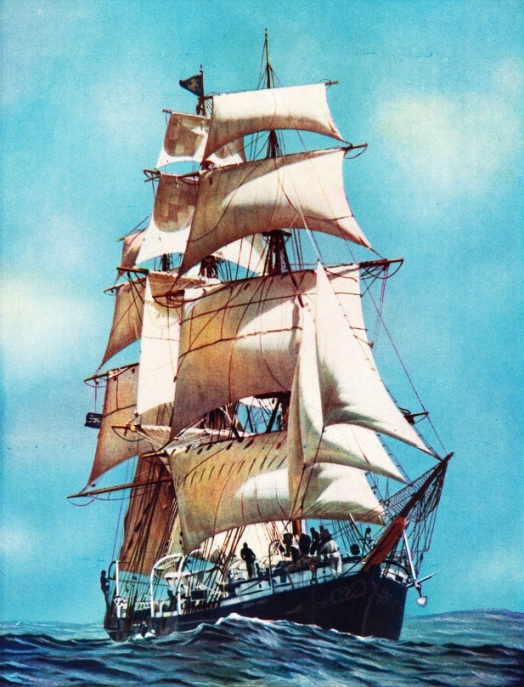