Part 49 of Shipping Wonders of the World was published on Tuesday 12th January 1937.

This issue included a colour plate illustrating the Mauretania, as part of the chapter on the Romance of the Mauretania. The plate was attached to page 1549 of this part, and also appeared previously as the cover of part 19.

This week’s cover shows a scene on board the Grace Harwar (1,816 tons gross), near Cape Horn, when the hands were on the weather main yard getting the mainsail fast. 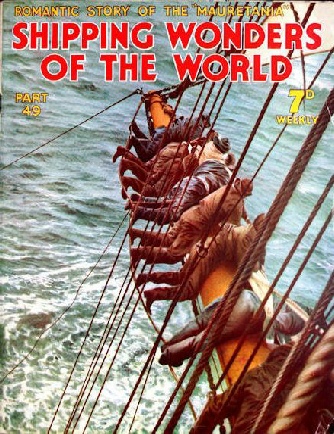 The account of the provisions for safety at sea concluded from part 48.

Romance of the Mauretania

Holder of the Blue Riband of the Atlantic for over twenty years, the Cunard liner Mauretania was one of the most remarkable ships ever built. When she was broken up in 1934 after a long and proud career, her loss was felt keenly by thousands of ship lovers all over the world. Her only serious mishap was a fire in 1921. While effecting the necessary repairs the Cunard Line took the opportunity of converting the Mauretania into an oil-burning vessel, giving her a new lease of life. It is illustrated by a fine colour plate, a reproduction of the cover of Part 19.

Battle of the Dardanelles

No historic naval engagement did so much to prove Admiral Mahan’s contention that “ships are unequally matched against forts” as the action in the Dardanelles on March 18, 1915. The persistence of the Nelson tradition (which, incidentally, was the spirit of the Navy long before the time of Nelson himself, as the story of Sir Richard Grenville shows) is admirably illustrated in this chapter. This chapter is part of the series on Decisive Naval Actions covering the tactics and strategy, the battle of wits, that lie behind the stories of opposing fleets.

The Santa Joana, described in this chapter, is unusually interesting because she is the first large diesel-driven Portuguese trawler, and one of the largest fishing craft so far built with the Maierform hull shape; she is, moreover, the first motor trawler to be fitted with two diesels geared to a single shaft. Built for fishing on the Grand Banks, she is almost a cargo ship in size, having a length between perpendiculars of 208 feet, a beam moulded of 34 ft 9½ in, a depth to the main deck of 19 ft 4¾ in, and a maximum draught in fully-laden condition of 17 ft 10¾ in.

Flagship of the Holland-America Line, the Statendam is the third vessel to bear the name. Completed in 1929, this popular Dutch steamship is renowned alike for the excellence of her machinery and for the luxury of her passenger accommodation. Though not one of the newest ships of the Dutch merchant navy, the Statendam is a fitting representative of that nation, which has ranked as a power in merchant shipping since the seventeenth century. She is mainly used on the transatlantic service, but also cruises for months at a time between New York and the Mediterranean and Caribbean.

This chapter is the twelfth in the series on The World’s Largest Ships.

The principles and methods of naval construction have altered so radically and quickly in the present century that the important developments in steam warship design during the last century are apt to be forgotten or underestimated. The first British steam warship built to Admiralty orders was HMS Comet, launched at Deptford in 1822. She was a wooden ship, and wooden steamships persisted in the Navy for many years until their doom was sealed by the increased efficiency of naval gunnery.

Voyage of the Athene

The advantages of having sail as well as an auxiliary engine upon which to rely during a long ocean cruise are well demonstrated by the 18,000-miles voyage of the auxiliary yawl Athene from Los Angeles to Shoreham, Sussex. The Athene belonged to Tay Garnett, the film director, who made a protracted voyage in her to photograph backgrounds of real scenery for some of his films. The story of her 18,000-miles voyage, from San Francisco to Shoreham, Sussex, in just over seven months, is described here.

The exploits of armed German merchantmen and certain independent cruisers such as the Dresden during the war of 1914-18 - exploits rife with incidents and coincidence - make the story of these raiders more entertaining than fiction. This chapter covers the story of the Dresden, the Kaiser Wilhelm der Grosse and other noted German raiders which gave the British ships a good “run for their money”. This article is concluded in part 50.

ONE OF THE MOST POPULAR TRANSATLANTIC LINERS was the Mauretania, shown being painted at Southampton in preparation for one of the cruises on which she was sometimes employed. A quadruple-screw liner of 31,938 tons gross, the Mauretania had an effective life of twenty-seven years. She and her sister ship the Lusitania were, at the time of their completion, the world’s largest ships, and the installation of turbine propelling machinery was a courageous venture. On her trials the Mauretania covered 1,216 miles at an average speed of 26.04 knots. In 1908 she captured the Blue Riband of the Atlantic and held it for over twenty years. As she grew older her speed increased. She was sold for breaking up in 1934. 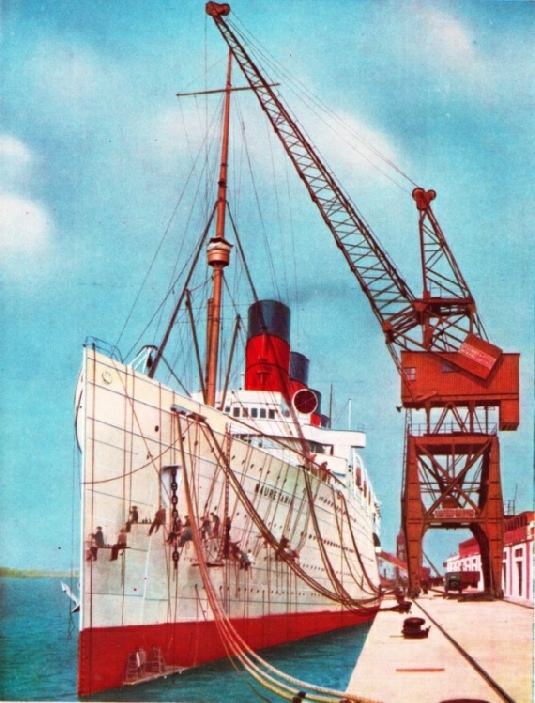