Part 47 of Shipping Wonders of the World was published on Tuesday 29th December 1936.

This issue included a colour plate illustrating HMS Hood, as part of the chapter on Big Guns in Action. The plate was attached to page 1421 of this part, and also appeared on the cover of this issue.

This week’s cover, showing HMS Hood, was specially painted for Shipping Wonders of the World by H H Rodmell. This attractive picture also forms the subject of the colour plate in this week’s part. 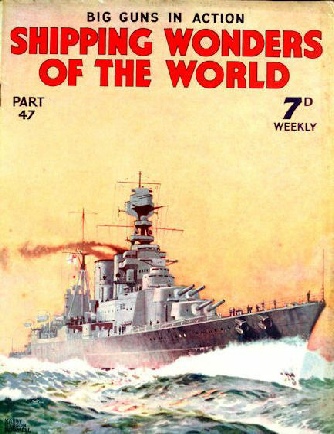 The account of the refloating of the United States battleship Maine.

This is the ninth article in the series Dramas of Salvage and is concluded from part 46.

One of the first noticeable features of the Ilmatar is the peculiar fore foot of the stem. This is in effect an icebreaker stem and is necessary because of the conditions prevailing in winter in and near Baltic ports. This unusual vessel is a passenger and cargo ship typical of many similar ships owned by the Baltic nations and running across the North Sea. The Ilmatar was built in

1929 at Copenhagen by Burmeister and Wain for the Finland Line, which maintains services between Finnish and North Sea ports.

This is the thirty-seventh article in the series on Merchant Ship Types.

The firing of a salvo from a modern warship is an unforgettable experience, overpowering in its effect on the senses and on the imagination. Modern gunnery is so technically perfect that hits can be registered on targets invisible to the naked eye. The gun is still the principal weapon in naval warfare, not even excepting the torpedo. Naval gunnery is becoming more and more of an exact science. In the time of Nelson guns could not score hits at a range of above half a mile. Nowadays, however, naval guns have an effective range of ten miles and more, and gunners can score a hit on a target that is out of their sight below the horizon. This chapter contains valuable statistics, and gives a comprehensive account of modern naval gunnery.

This is the twelfth article in the series The Navy Goes to Work. There is another article on The Ship and the Gun in part 52.

The largest city on the Pacific North-West, Seattle received her first white settlers in 1851. Since then, thanks to her extensive harbours and to the unrivalled natural resources of the State of Washington, the port had grown with amazing rapidity. Later the city was almost completely destroyed by a fire. Seattle, however, rose phoenix-like from the ashes and, in place of the ugly buildings which had been burned down, beautiful business blocks and wide streets were planned, so that to-day Seattle is a fine city. Gold brought prosperity to Seattle, for it is one of the nearest US ports to Alaska, and it grew gradually into the major port it is to-day.

This is the fourteenth article in the series on Great Ports of the World.

Speedy communication by telegraph from continent to continent was first made possible by the specialized work of the cable-laying and repair ships. The subject of cable-laying is an interesting one. The preparatory work involves surveys of the ocean bed which - contrary to a general belief that it is relatively flat - may consist of considerable submerged mountains. Cables of three distinct kinds are made - shore-end, intermediate and deep-sea. Deep-sea cables lie securely on the bed of the ocean and are subject to no great stresses in normal conditions. Shore-end cables, however, which are sued for the section of the telegraph line which connect the cables houses on shore with the intermediate sections, are subject to comparatively rough treatment from the action of seas and rocks, and are considerably stronger than deep-sea cables. This chapter describes the work of surveying the route, laying the cable and carrying out necessary repairs. There is another chapter on Cable Ships at Work.

You can read more on the first Atlantic cable in Wonders of World Engineering.

From the general appearance of a merchant ship and from the number and arrangement of decks, it is often possible to tell the nature of the trade on which she is employed or for which she was built. Thus deck arrangement forms a suitable key for the classification of merchant ships.

Many famous warships of the eighteenth and early nineteenth centuries were built at Buckler’s Hard, on the Beaulieu River, Hampshire, a place conveniently situated near the stout oaks of the New Forest. It is hard to credit that the peaceful village of Buckler’s Hard was once renowned as a shipbuilding centre. Yet it was so, and many of the “wooden walls” were built there, including the Pandora, famous in connexion with the story of the Bounty, and the Agamemnon, the Euryalus, and the Swiftsure, which were at Trafalgar.

Voyage of the “Cleopatra”

That familiar London landmark, Cleopatra’s Needle, now on the Victoria Embankment, was towed from Egypt in  a vessel, the Cleopatra, which had been specially built round the obelisk. After abandonment in tragic circumstances during a storm in the Bay of Biscay, the Cleopatra safely reached Gravesend, Kent, on January 21, 1878. The Needle was jacked up and a ship, appropriately named the Cleopatra, was built round it. The vessel, which presented an extraordinary appearance, was towed from Alexandria, with London as her destination.

Battle of the Falklands

Having inflicted defeat on Admiral Cradock’s squadron off Coronel on November 1, 1914, von Spee’s German squadron was almost annihilated little over a month later after a sensational action off the Falkland Islands.

This chapter is the seventh article in the series on Decisive Naval Actions. The article is concluded in part 48.

6 in and a displacement tonnage of 42,100. She is armed with eight 15-in, twelve 5.5-in and four 4-in anti-aircraft guns, in addition to twenty-three smaller pieces and six 21-in torpedo tubes. An important feature of this huge vessel is the extent of her protective armour. Her geared turbines have a designed horse-power of 144,000 and give her, through four shafts, a speed of 31 knots. The cost of HMS Hood is estimated at £6,025,000. She underwent a general refit in 1929-30 and is due for replacement in 1941. 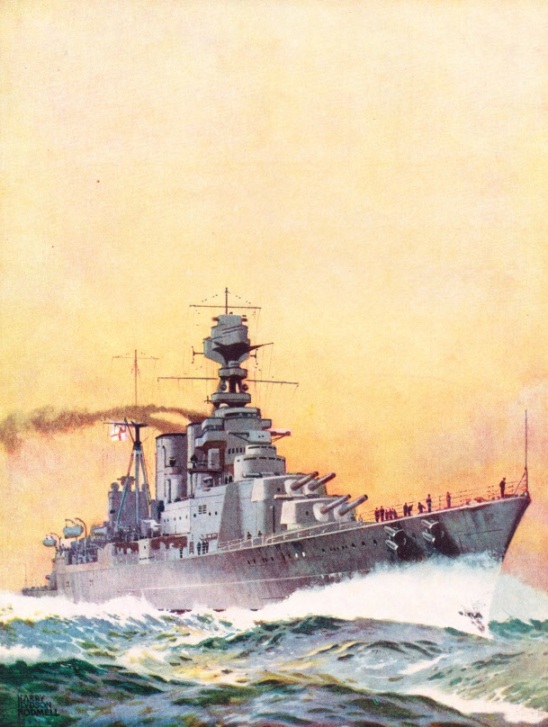