This ship plies between Sassnitz (Germany) and Trelleborg (Sweden), a sea passage of 65 miles

BROADSIDE VIEW OF THE DROTTNING VICTORIA AT SEA

This boat plies between Sassnitz (Germany) and Trelleborg (Sweden), a sea passage of 65 miles.

DESPITE the high standard to which the railway ferry has attained in the United States and Canada, one must come to Europe to see its most imposing development from the all-round point of view. In fact, the latter services of this character are superior in size, speed and luxury. The Danish Government has several floating railways in operation, the longest route being between Gjedser and Warnemunde, a distance of 26 miles. But the pre-eminent European service is that in operation between Sassnitz, on the German seaboard, and Terlleborg, in Sweden, as the vessels have to traverse 65 miles of the Baltic Sea, with its treacherous currents, tides, storms and ice. When the elements are in torment the seas are particularly heavy.

This ferry service was brought into operation by the G 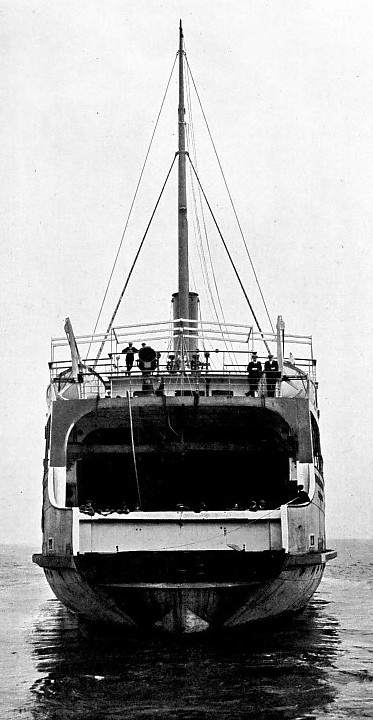 erman and Swedish Governments at an outlay of nearly £1,000,000, the respective countries contributing two vessels each to the fleet. The two German boats were built in that country: one of the Swedish craft was constructed in Sweden, while the other, Drottning Victoria, was furnished by Swan, Hunter, and Wigham-Riehardson, Limited, of Wallsend-on-Tyne. As the four vessels are practically identical, a description of the broad features of the British-built vessel will suffice for all. The Drottning Victoria has an overall length of 370 feet, beam 53½ feet, draught loaded 16½ feet, displacement 4,270 tons, and a maximum speed on service of 16½ knots - about 19½ miles per hour - this being adequate to enable the sea journey of 65 miles to be covered within four hours.

The main deck carries two sets of metals, which are sufficient to receive eight bogie passenger-coaches in two parallel rows, each 295 feet in length. The cars are run upon the vessel over a special bridge. To accommodate the variations in the level of the tracks owing to tidal influences, a system of trimming tanks is brought into action to maintain the trim of the vessel during the operation. The car deck is so designed as to be able to receive coaches measuring 15¼ feet in height, by a width of 11 feet 2 inches - the maximum dimensions permitted by the respective State railway systems.

The arrangements for securing the coaches are interesting. Along the deck heavy shackles are fitted both inside and outside the track. The former are spaced 4 feet 4 inches apart, while the latter are placed at intervals of 8 feet 8 inches. Specially designed screws are attached to these deck plates and shackles provided on the coach frame, to hold the coach absolutely rigid. But, as an extra precaution during heavy weather, additional similar screws are introduced between the top of the car and the deck girders on each side, thereby protecting the superstructure of the coach from swaying motions. In order to relieve the strain upon the car springs during transit heavy jacks are placed beneath the carriages and extended just sufficiently to lift the coach-body off the wheels.

STERN VIEW OF THE DROTTNING VICTORIA

The ferry is equipped with magnificent accommodation for the comfort of the passengers, the appointments being carried out upon the most liberal lines, so that the craft is both a ferry and steamship in one. Indeed, an atmosphere of luxury such as is seldom approached upon cross-channel mail-boats is presented, there being dining and smoking saloons, lounge, drawing-rooms, and regal apartments on the promenade deck; below the car deck is the stateroom accommodation for 96 first-class and 45 third-class passengers.

As the ferries make the crossing at night, many passengers do not wish to forsake their sleeping quarters in the train, and yet desire the conveniences concerning heat and attention incidental to modern travel. The steam heating facilities of the train, therefore, are coupled to the ship’s heating system by a connection at the buffer stops, while electric-bell connection with the stewards on board is effected at the same point. 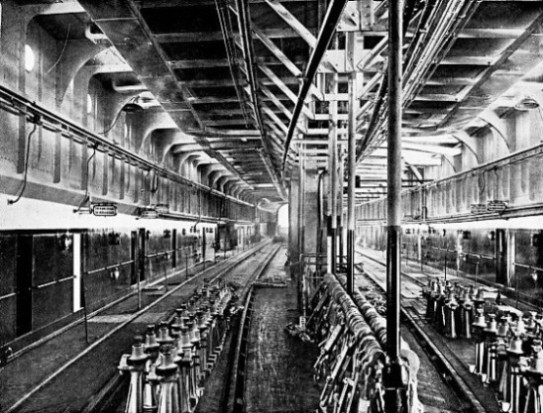 Showing screws whereby the train is secured to shackles in the floor, and jacks, which placed beneath the axles of the coach relieve the springs.

The vessel herself conforms in every respect with the latest ideas in shipbuilding. The hull is freely subdivided into watertight compartments, fitted with Stone-Lloyd watertight doors. Two large searchlights are carried, one forward and one aft, to facilitate entrance into the terminals, and a bow as well as a stern rudder is fitted. The former is used in conjunction with the latter only when travelling astern, as when backing into the dock, since the trains are run on and off at the stern. At other times the forward rudder, which virtually forms part of the stem of the vessel, is locked by a bolt in the neutral position.

In addition to the passenger and crew accommodation, facilities are also provided for housing the Customs staff, the railway officials, and the Postal department. The Customs officials perform their duties during the journey, while simultaneously the sorting of the mails progresses. It is admitted that, from the point of comfort and luxury, these railway ferries have no equal, while they represent a decided advance upon American practice so far as the shipbuilding craft is concerned. Each boat cost about £115,000, so that the outlay on the fleet was approximately half-a-million sterling. The Drottning Victoria on her official trials easily exceeded the contract speed, while in service her seagoing qualities have not failed to arouse widespread attention among travellers frequenting this route. 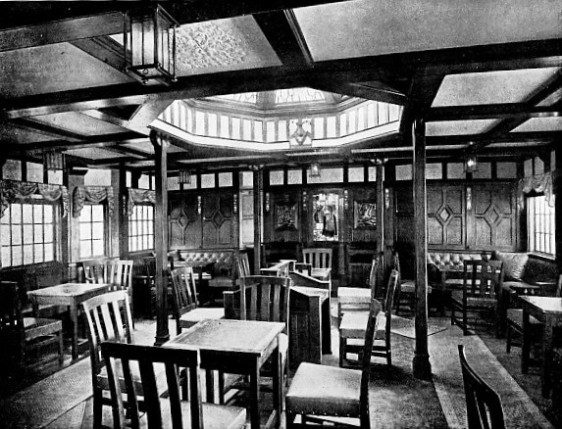 This boat is luxuriously furnished.

[From Railway Wonders of the World by F A Talbot]

You can read more on “The Dover-Dunkirk Train Ferry”, “The Lake Baikal” and “The Twickenham Ferry” on this website.