Despite challenges to its supremacy from aircraft and submarine, the battleship continues to stand high in world-naval opinion, which still regards it as the central unit of the modern fleet 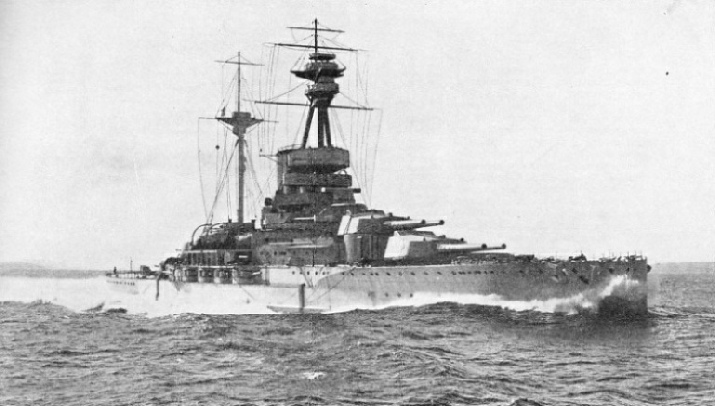 FULL SPEED AHEAD. A striking picture of H.M.S. Revenge. This battleship has an overall length of 624½ feet, a beam of approximately 102½ feet and a mean draught of 28½ feet. Her displacement is 29,150 tons. She was completed in 1916, and her armament comprises eight 15-in, twelve 6-in, four 4-in, anti-aircraft and a number of smaller guns. The ship is fitted also with two 21-in submerged torpedo tubes. Her normal speed was 23 knots without anti-torpedo bulges. H.M.S. Revenge underwent an extensive refit in 1928.

IN spite of many threats to its supremacy, and even to its existence, the battleship is still regarded by British and foreign naval opinion as the backbone of sea power. Nearly fifty years ago an Admiralty representative told the House of Commons that the battleships to be laid down in that year (1887) would probably be the last to be built. At that time the view was widely held that the great ship would soon be driven off the sea by small torpedo-boats armed with the locomotive torpedo; but this opinion was soon modified after exercises and manoeuvres at sea.

With the coming of the submarine the value of the battleship was again challenged, but war experience demonstrated its ability to keep the seas in the teeth of the submarine menace. The latest threat to the great ship comes from the air. So far, however, neither the British nor any foreign admiralty is satisfied that aircraft spells doom to the battleship. In their view, the battleship in a well-found fleet will be protected against concentrated air attack by its own machines - accommodated in aircraft carriers and cruisers - just as it is already screened from hostile submarines by its destroyer escort. Any enemy ‘planes breaking through the air patrol will be met by the fire of anti-aircraft guns, for which a steadily increasing accuracy is claimed. Torpedo ‘planes and low-flying bombers must face a torrent of shell from the new multiple pom-poms, with which all our larger ships are now armed. Such bombs as may strike home will, it is believed, be kept out of the vitals of the ship by her armour decks, which in the latest battleships have a total thickness exceeding 7-in; further, the effect of torpedoes dropped from ‘planes will be localized by the bulges originally fitted as an answer to the submarine menace. Such are the arguments on which high naval authorities the world over base their confidence in the continued supremacy of the battleship.

The British Navy at the time of writing has twelve battleships and three battle-cruisers. Grouped under the heading of “capital ships”, they occupy a pivotal position in naval strategy. The battle cruiser is essentially a fast battleship, in which a certain degree of gun-power and armour protection is sacrificed to gain higher speed. The present tendency in all navies is to combine the salient features of both types in a single ship. Eventually, therefore, the standard capital ship may become a thirty-knot battleship.

In modern conditions of strategy the capital ships of a fleet are likely to be held in reserve at a base which is reasonably secure against submarines and air attack. Their function is to cover the active operations of the lighter forces engaged in protecting the trade routes in near and distant waters, and they would emerge only in the event of hostile battleships coming out to molest these forces. Whereas the cruiser exists primarily to safeguard floating trade, the capital ship is built expressly to engage the heavyweights of all enemy fleet. She mounts from six to twelve guns of the heaviest calibre, is fitted with massive armour-plating over vital parts and is endowed with a speed from six to eight knots below that of contemporary cruisers. Add to these requirements a fuel capacity sufficient for a steaming radius of 8,000 to 10,000 miles, and accommodation for a crew of no fewer than 1,100, and it becomes evident that the modern battleship must be of great tonnage. The average displacement of our fifteen ships works out at about 32,000 tons. Displacement signifies the number of tons’ weight of sea water displaced by a ship floating at her normal draught. 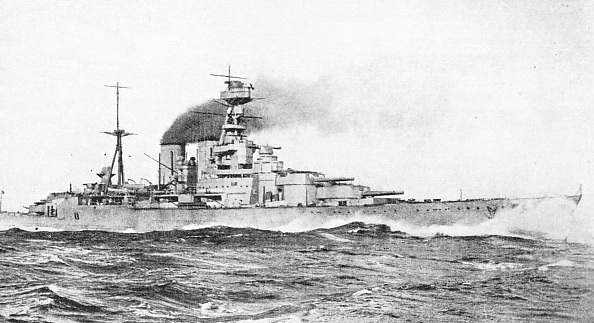 BATTLE CRUISER H.M.S. Hood, laid down in September 1916, was launched in August 1918. She has a displacement of 42,100 tons. Her length between perpendiculars is 810 feet, and beam, outside bulges, 105 ft 2½-in. With a designed speed of 31 knots, this battle cruiser carries eight 15-in guns, twelve 5·5-in, four 4-in anti-aircraft and a number of smaller weapons. She has also six 21-in torpedo tubes.

The addition of anti-torpedo “bulges” and the like has brought down the speed of Renown and Repulse.

As Nelson, with her sister, Rodney, and Hood are the most modern capital ships in the British Navy, they merit a more detailed description. Originally ships of the Nelson class were designed as battle cruisers of 48,000 tons, with a speed of 31 knots; but, the Washington Treaty having imposed a limit of 35,000 tons on all new capital ships, tha plans had to be revised. The length was therefore reduced by about 200 feet and the originally planned horse-power reduced to 45,000, the original armament and scheme of armour protection being retained. These changes account for the somewhat grotesque, “sawn-off” appearance of the two ships, which in contrast to the abnormally long forecastle, have a very short quarter-deck. The bridge and funnel are placed much farther astern than in earlier ships. The main armament of nine 16-in guns in triple turrets is concentrated on the foredeck. This was done to enable a massive armoured redoubt to be built round the turret bases, powder magazines and shell-rooms. Had the gun turrets been more widely distributed it would not have been feasible to give them such efficient protection. The 16-in guns are among the heaviest ever mounted in the British Navy. Each is 62 feet long, weighs 103½ tons and fires a projectile of 2,461 lb, the extreme range being well over twenty miles. The rate of fire is one round in thirty-five seconds. Twelve 6-in guns, forming the secondary armament, are mounted in twin turrets towards the stern, with an angle of elevation high enough to enable them to be used against aircraft. Being power-worked, these guns can be served with great rapidity. On the superstructure and the quarterdeck are six 4·7-in anti-aircraft guns, the armament being completed by twenty-six smaller pieces, including machine-guns, and by two submerged torpedo tubes. 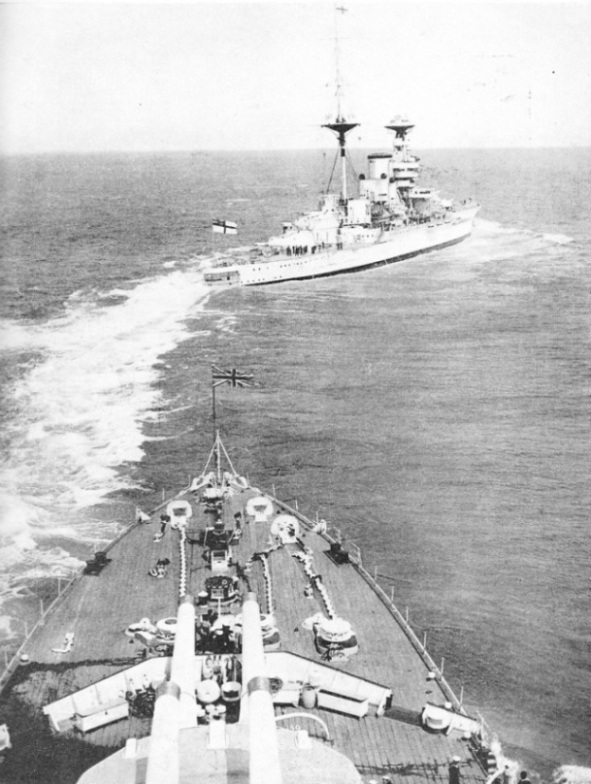 AFTER THE NAVAL REVIEW at Spithead in the summer of 1935, King George V led his fleet into battle manoeuvres. This picture, taken from Royal Sovereign, shows Queen Elizabeth at the head of the battle line. As reconstructed, Queen Elizabeth has a length between perpendiculars of 600 feet, and a displacement of 31,100 tons. Her armament comprises eight 15-in guns, twelve 6-in, a number of smaller guns, and two submerged 21-in torpedo tubes.

A belt of 14-in armour covers two-thirds of the waterline, and above this stretches from side to side an armoured deck 6¼-in thick, to keep out shells descending at a steep angle and aircraft bombs. No other ships now afloat are so well protected in this way. The hull below water is honeycombed with watertight compartments to localize the effect of torpedo or mine explosions. Thus, the Nelson approaches the ideal battleship design in its ability to deliver and withstand the heaviest blows. The full complement of either ship is 1,314 officers and men. They cost over £7,500,000 apiece, and the annual charge for upkeep in full commission is £432,900 for either ship.

Hood is, by a wide margin, the largest man-of-war in existence. Her displacement is 42,100 tons, exceeding that of Rodney, the next largest naval vessel, by 8,200 tons. She is the only survivor of a group of four battle cruisers begun in 1916, the other three having been discontinued and broken up after the Armistice.

Her length overall is 860½ ft and her beam 105 ft 2½-in. She is propelled by turbines of 144,000 horse-power, taking steam from twenty-four Yarrow boilers. On her trials, run in bad weather, she attained a speed of 32 knots - nearly 37 land miles an hour. In common with other British capital ships she burns oil only and can stow 4,000 tons of this fuel. She carries eight 15-in guns in four turrets, two of which are disposed forward and two aft. Each gun weighs 97 tons and fires a projectile of 1,920 lb. Their mountings permit of an elevation up to 30 degrees, Hood being the first ship to have this innovation. The secondary armament of twelve 5·5-in guns is mounted in an open battery. In addition there are four 4-in anti-aircraft and twenty-three smaller guns, besides six torpedo tubes. 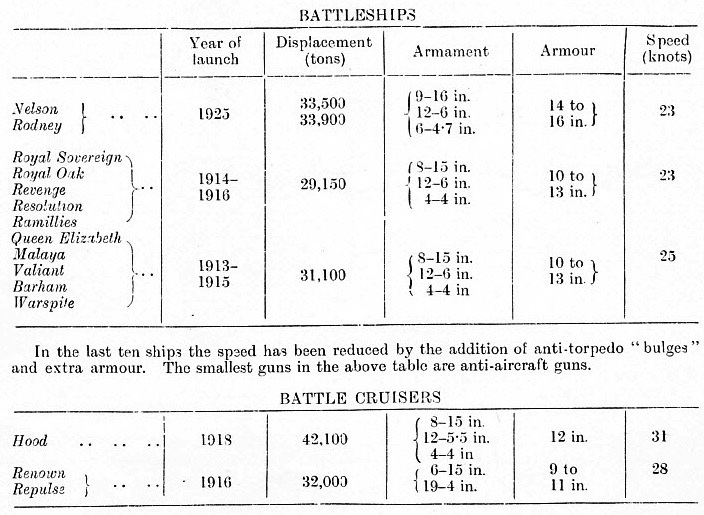 No fewer than 13,800 tons of armour have been worked into the ship, more than a third of her total weight. The main belt is 12-in thick, and the gun turrets, 12-in on the sides, are faced with 15-in armour. Along the greater part of the hull runs an anti-torpedo “bulge” and the hull proper is minutely divided up into watertight compartments. Her powerful armament and strong protection tend to lift Hood out of the battle cruiser category and make her a “full-blooded” battleship of exceptional speed. Naval experts consider her to be one of the finest and most successful man-of-war types. She cost £6,025,000 to build. 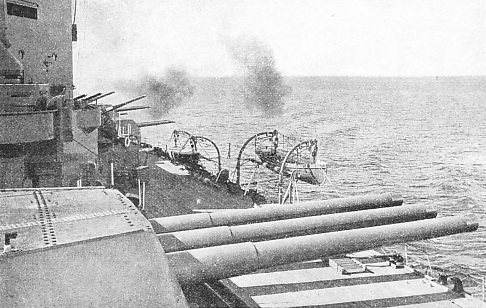 The five Queen Elizabeths are also successful ships. Laid down in 1912-13, they were the first British battleships to be fitted for burning oil only. They mount the same main armament as Hood, and their protection above and below the waterline is substantial.

The Royal Sovereign class, begun in 1913-14, is identical with Queen Elizabeth in armament and protection, but the ships are slower by two knots and, because of their reduced freeboard, not quite such good sea boats.

The battle cruisers Repulse and Renown were begun in 1915 and completed within eighteen months, a record for ships of their tonnage. They carry only six 15-in guns apiece and their armour protection is much inferior to that of Hood. On her trials Renown logged 32¾ knots, but 30 knots is probably the best of which either ship is capable to-day. Each cost about £3,000,000 to build and complete.

LAID DOWN IN 1913 and completed in October, 1915, H.M.S. Barham is a battleship of the Queen Elizabeth class. She has a displacement of 31,093 tons, a length between perpendiculars of 690 feet and a beam of 104 feet. Designed speed is 25 knots, and armament consists of eight 15-in guns twelve 6-in and smaller weapons. There are two 21-in submerged torpedo tubes. Vessels of this class wore reconstructed between 1925 and 1933

You can read more on “Beneath the Surface”, “Guarding the Seas” and “With the Fleet at Sea”on this website.